On July 7, 2014, an arbitral tribunal established under Annex VII of the United Nations Convention on the Law of the Sea (UNCLOS) delivered its award in the Dispute concerning the Maritime Boundary between Bangladesh and India (Bangladesh v. India).[1]  The arbitral tribunal delimited the maritime boundary between the territorial sea, the Exclusive Economic Zone (EEZ) and the continental shelf within and beyond 200 nautical miles (M) of the People’s Republic of Bangladesh (Bangladesh) and the Republic of India (India) in the Bay of Bengal.  The arbitral tribunal determined the terminus of the land boundary/starting point of the maritime boundary in an area where the coast is highly unstable.

The arbitral tribunal’s award marks only the second time that a tribunal has delimited a continental shelf boundary beyond 200 M.  It contributes significantly to the existing jurisprudence on the jurisdiction of international courts and tribunals to delimit a lateral outer continental shelf boundary pending consideration of submissions on the outer limits of the shelf by the Commission on the Limits of the Continental Shelf (CLCS).  The award also consolidates existing jurisprudence on concavity of a coast as a relevant circumstance in maritime delimitation.  When combined with the 2012 judgment of the International Tribunal for the Law of the Sea (ITLOS) in the parallel delimitation dispute between Bangladesh and Myanmar,[2] the award brings to an end decades of uncertainty as to the allocation of maritime entitlements within the Bay of Bengal.

Negotiations on maritime boundaries in the Bay of Bengal between Bangladesh and its neighboring States of India and Myanmar had been ongoing since the 1970s.[3]  Myanmar and India favored a delimitation based on equidistance.  Bangladesh maintained that due to its position within the concavity of the Bay of Bengal, a delimitation based on equidistance would be inequitable, as it would cause a cut-off effect.

Having failed to agree on maritime boundary delimitation through negotiations, Bangladesh instituted arbitral proceedings against India pursuant to Annex VII of UNCLOS on October 8, 2009.  Bangladesh also instituted Annex VII arbitration against Myanmar regarding the delimitation of their maritime boundaries on the same day, but that case was transferred to ITLOS in December 2009.  ITLOS delivered its judgment in the Bangladesh/Myanmar case on March 14, 2012.[4]  Unlike the Bangladesh/Myanmar case, here India did not agree to submit the dispute to ITLOS, so an arbitral tribunal was constituted to settle the dispute in accordance with Annex VII of UNCLOS.[5]    India did not contest the jurisdiction of the arbitral tribunal to settle the dispute.

The arbitral tribunal first considered its jurisdiction over the dispute, in particular its jurisdiction to delimit the continental shelf beyond 200 M.  On May 11, 2009, India made a partial submission to the CLCS claiming areas of continental shelf beyond 200 M in the disputed area.  Bangladesh objected to the Indian submission in a note verbale dated November 29, 2009, claiming that the submission failed to comply with UNCLOS and the CLCS Rules of Procedure.  On February 25, 2011, Bangladesh filed its own submission with the CLCS.  India responded in a note verbale dated June 20, 2011, noting that the baselines drawn by Bangladesh did not comply with Article 7 of UNCLOS, which sets out the rules for the drawing of straight baselines.

Bangladesh challenged several of India’s proposed base points on the grounds that they were located on alleged low tide elevations (LTEs), the existence of which Bangladesh disputed.  In particular, Bangladesh claimed that South Talpatty/New Moore Island had permanently disappeared below the surface by the early 1990s.  The arbitral tribunal held that, while LTEs may be used as base points for measuring the breadth of the territorial sea, it did not necessarily follow that they were appropriate base points for use by a tribunal delimiting a maritime boundary.  The site visit carried out by the arbitral tribunal had not confirmed whether South Talpatty/New Moore Island constituted an LTE but, in any event, the arbitral tribunal held that it was not a suitable geographical feature for the location of a base point for delimitation purposes.[11]

The arbitral tribunal delimited the territorial sea using the equidistance method, finding that there were no special circumstances justifying a deviation from the equidistance line approach.  Bangladesh had initially argued that given the instability of the coastline, the identification of base points was not feasible and that the construction of a provisional equidistance line was not an appropriate method of delimitation.  Bangladesh considered that the use of a 180° angle bisector would be the most appropriate method of delimitation.  However, following the decision of ITLOS in Bangladesh/Myanmar rejecting Bangladesh’s argument on the impossibility of identifying suitable base points due to coastal instability, Bangladesh changed its position and constructed a provisional equidistance line as an alternative argument.

The arbitral tribunal applied the same methodology within and beyond 200 M, adjusting the provisional equidistance line into a simpler straight line to avoid a cut-off effect arising from the concavity of Bangladesh’s coast.  At the final stage of the delimitation process, the Tribunal assessed the proportionality of the allocation of maritime zones by reference to the overall geography of the area, finding that no alteration of the adjusted equidistance line was required.  The delimitation effected by the arbitral tribunal is illustrated below. 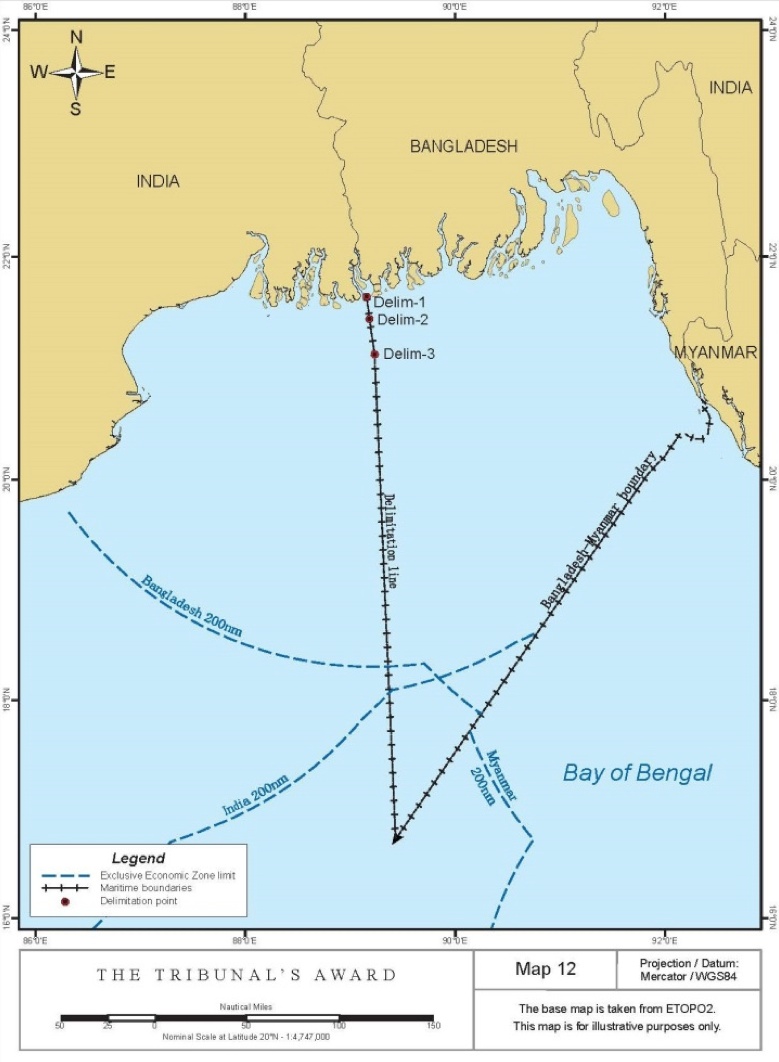 A similar grey area was created by ITLOS in Bangladesh/Myanmar, where the seabed of the grey zone is Bangladesh’s continental shelf and the superjacent waters constitute Myanmar’s EEZ.  The arbitral tribunal noted the overlap stating:

The present delimitation does not prejudice the rights of India vis-a-vis Myanmar in respect of the water column in the area where the exclusive economic zone claims of India and Myanmar overlap.[12]

This is in line with the statement earlier in the award that “the Tribunal must consider the Judgment of the International Tribunal for the Law of the Sea as res inter alios acta.”[13]  Within the overlap of grey areas, both decisions recognise Bangladesh’s rights over the continental shelf, whereas India and Myanmar’s rights to the EEZ overlap.

In brief, the arbitral tribunal delimited the maritime boundary between the territorial sea, the EEZ and the continental shelf within and beyond 200 M of Bangladesh and India in an area where the coastlines of the parties are highly unstable.  The issue of coastal instability is of increasing importance to maritime boundary delimitation, given rising sea levels and the disappearance of certain maritime features.  In this context, the decision of the arbitral tribunal not to use an LTE as a base point for delimitation is significant.  It is noteworthy that the arbitral tribunal did not take the future instability of the coastline into account.

The award of the arbitral tribunal very closely mirrors that of ITLOS in the Bangladesh/Myanmar case, which is unsurprising given that three members of the arbitral tribunal also contributed to the ITLOS decision. The award thus adds weight to the ITLOS decision regarding the competence of international courts and tribunals to delimit outer continental shelf boundaries.

About the Author: Naomi Burke, an ASIL member, is an associate with the law firm of Volterra Fietta.

[5] The three ITLOS judges of the Annex VII Tribunal had also participated in the ITLOS decision in the Bangladesh/Myanmar case.

ASIL Insights provide concise, objective, and timely background for recent developments in international law. The American Society of International Law does not take positions on substantive issues, including those discussed in ASIL Insights.

Persons with expertise in international law who are interested in writing ASIL Insights are encouraged to submit proposals. Please click the button below to get started.